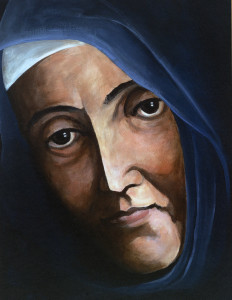 REFLECTIONS ON THE PORTRAIT OF MOTHER MARIE-ANNE

When the Island Illustrators decided to do their annual end of the year exhibition, Illustrating St. Ann’s, in 2003, I wasn’t sure at first what I was going to paint. Matter of fact I did not know very much about the Order at that time and decided to do some reading about its origins and its work.

When I read about Marie Esther Blondin I knew that I wanted to paint a portrait of her. It was a difficult time for me, my father had been ill for some time and he passed away December 7th 2003. Also a close friend lost his battle with cancer shortly after that. I believe that my mind was probably very reflective and receptive. I looked at some portraits that had been done by others and found out that none of them were done from real life or photographs. In other words, they were what was thought she might look like.

I spent quite a few hours researching what women in Quebec might look like in the 1800s. There were some definite facial characteristics that many had. I also found one old photograph, which was very old and fuzzy which showed a group of young women on some stone steps, one of them was possibly Marie Esther. I did what I could to enhance it and think that it helped form a picture of her in my mind.
Often when I paint, I listen to music, all kinds of music. This time I played Beethoven’s Missa Solemnis, Arvo Part’s Te Deum and especially the disc Carmina Sacra, which is a superb choral collection of composers such as Pergolesi, De Victoria, Mozart and Poulenc. I must have played that several dozen times.
As I painted Marie Esther, it was as if she was sitting in front of me; I still feel her eyes looking at me and through me. There were times that I truly felt that something or someone was guiding my hand, that I had no choice. When I finished the work, it was truly finished; I did not go back to it as I had often done in other paintings.

Later in 2004, I was asked by a friend to redo the Stations of The Cross that had been painted on brass in the 1800s and ended up in a church in North Vancouver. Many of the figures had deteriorated to the point they were hard to recognize. However, again I felt as if something was guiding my hand. The same happened when I did the series on genocide. To this day I still feel a presence when I paint. Often I find it difficult to believe that I really did the work.