“Be More Than a Bystander” for PeaceQuest

Julie Cormier, PeaceQuest Co-ordinator for the Sisters of St. Ann, reports on the “Be More Than A Bystander” assembly that took place on February 22nd at St. Andrew’s High School in Victoria.

The “Be More Than a Bystander” program was started by the  Ending Violence Association of BC  and led by the BC Lions football team to deliver to schools across British Columbia. BC Lions players, Rolly Lumbala and Jeremiah Johnson, spoke to the entire school about violence against women.  They focused on  sexual and physical violence and  described how to intervene in these situations without trying to be a “hero”. The players then provided an in-depth teach-in session to a group of 20 students, where participants talked about  how to intervene in order to be more than a bystander in situations of violence against women.

The content was profound and relevant.  Students and teachers appreciated this opportunity to hear from Lumbala and Johnson who serve as role models for both younger and older men.

The football players and school principal address the “Be More Than a Bystander” assembly. 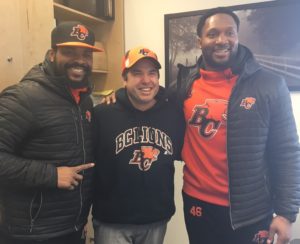