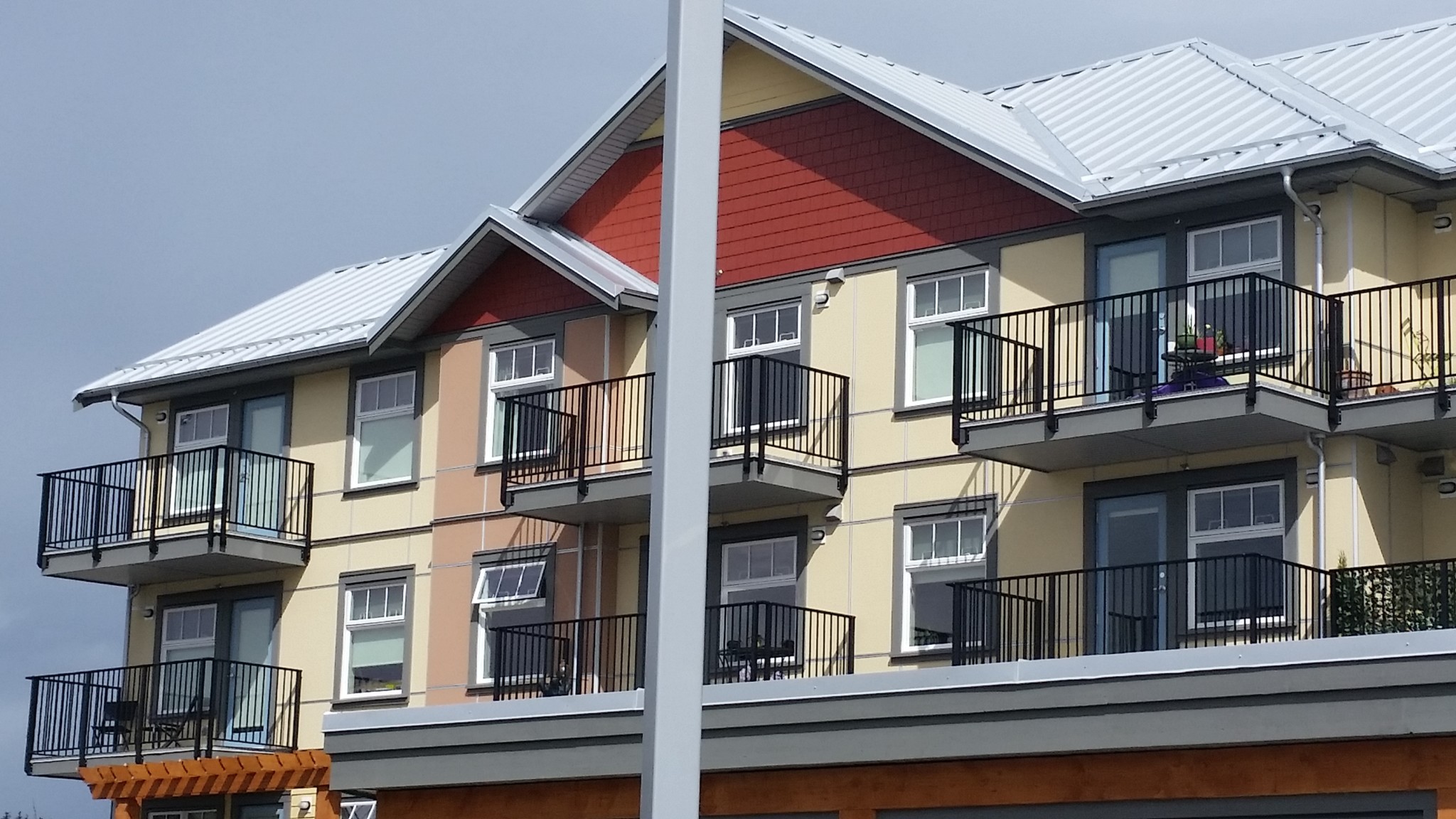 As Angela Hudson, Executive Director at St. Vincent-de-Paul, reminds us several times during our tour of Rosalie’s Village, the recently opened housing facility in Saanich, “We are not only a housing provider.”

Later, I asked Angela to elaborate more on that statement as I recalled the attractive town-house and apartment accommodations which are central to the project: 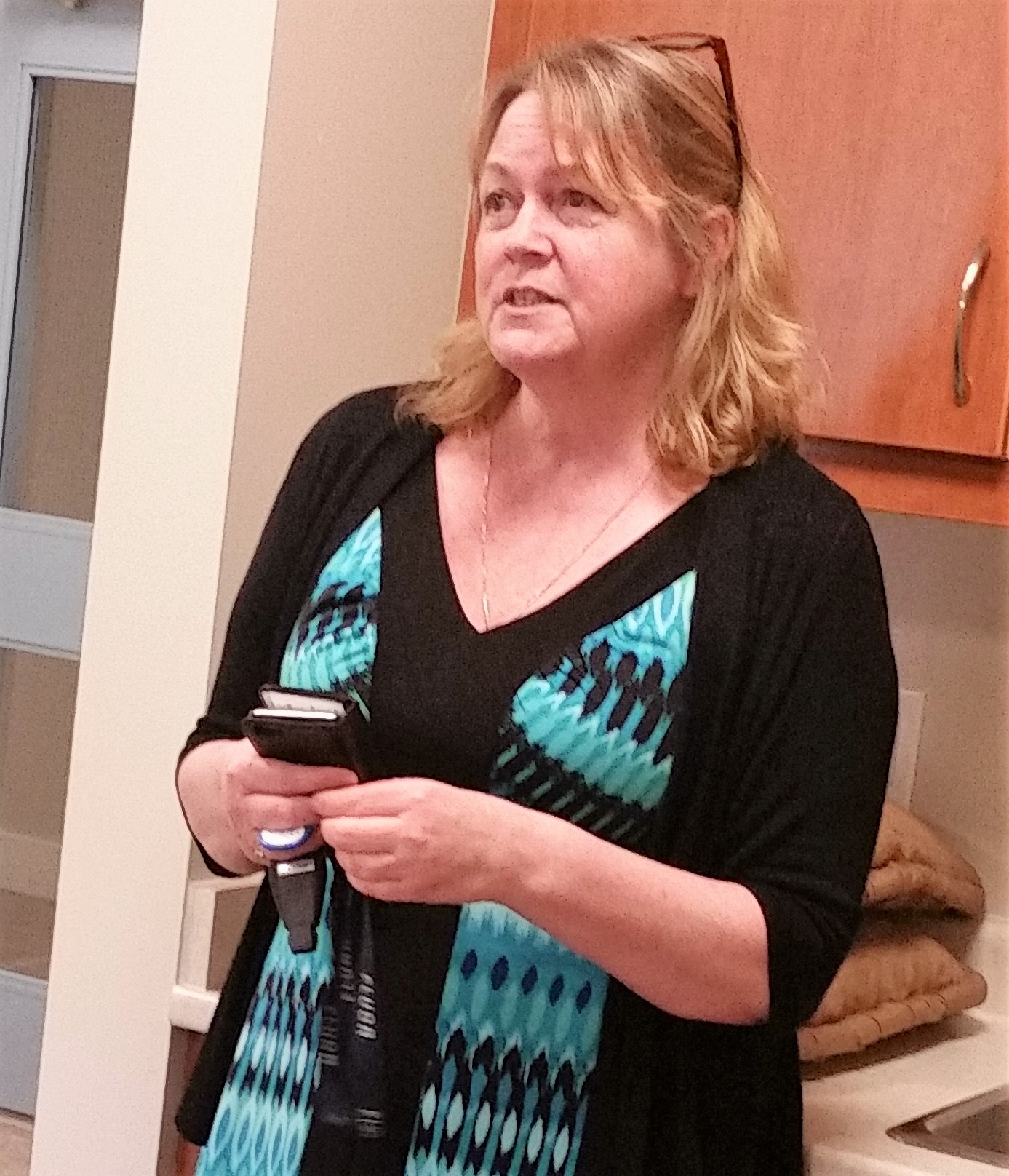 “The focus was, first and foremost, to empower women by providing a safe, stable, and supportive environment for them to achieve their goals. The components of Rosalie’s Village – the building, the housing and the childcare program – grew out of that focus.”

The building includes attractive communal spaces where residents can meet and plan the future with a support worker, gather over coffee with neighbours while their children roam safely in the playground, or arrange to view a movie on a rainy afternoon.   And there’s a fully-equipped community kitchen to facilitate the organization of festive events on a larger scale. Or that same kitchen might be used for a cooking class, only one of the newly proposed programs at Rosalie’s Village where  residents work with the staff in terms of what programs will best serve them.  Other courses planned so far include household budgeting, résumé writing, baby-sitting certification…and gardening… because, in addition to the on-site day-care centre which operates from 7:30 am to 5 pm Monday to Friday, there is a community garden with raised beds where residents are motivated to step outside their homes and grow dinner. 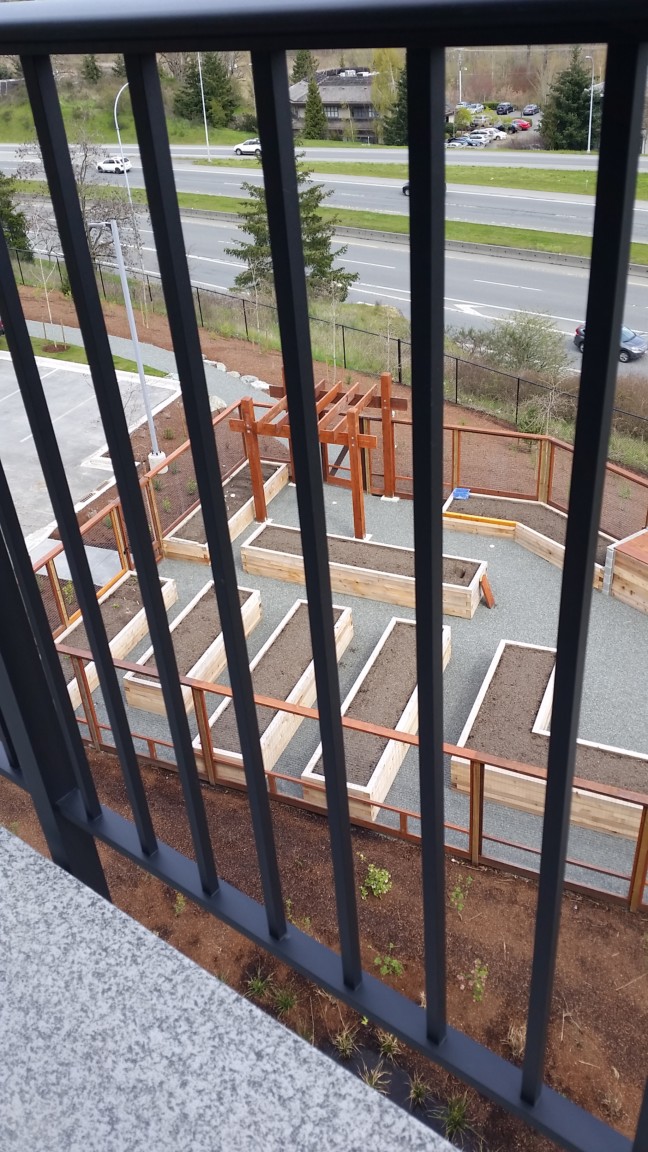 Balcony with a view over the raised beds

Single mothers with young children occupy the townhouses at Rosalie’s Village for a maximum of five years after which it is hoped that, with the best of planning, the mother will be earning a living wage and able to pay market rent . It must be comforting to be secure in your housing, be able to entrust your children to the certified staff at the free licensed day-care and then go off to work or to school. As Angela observes while showing us the day-care facilities, “Effecting a change in moms, means effecting a change in the children too.” Again, she emphasizes that they are not providing housing but making a difference. Sociologists are among the first to acknowledge that once housing is stabilized better life outcomes such as health, education and job stability follow.  With the basics of life under control, stress is reduced and it becomes easier to solve problems and set goals. 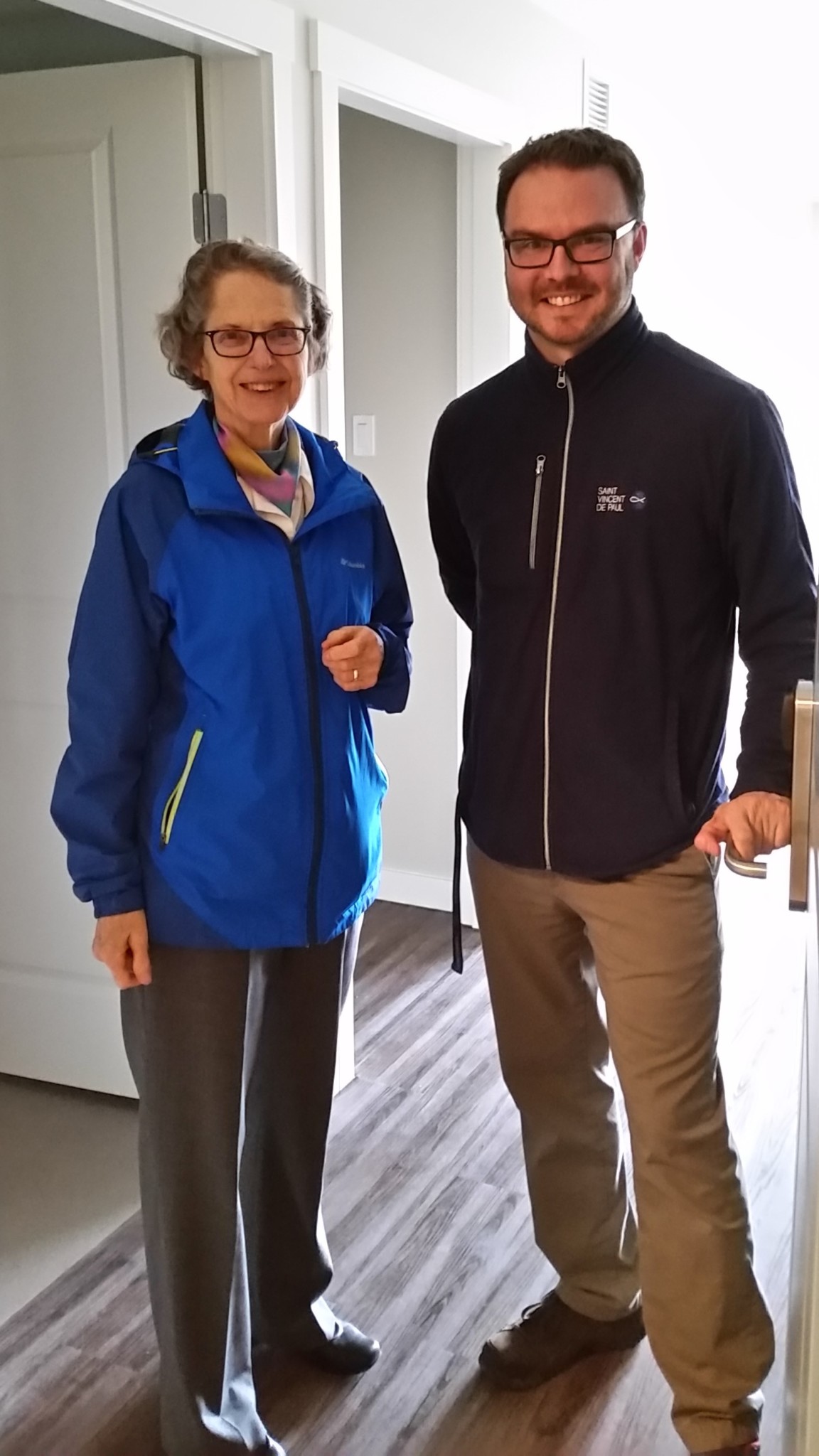 Property Manager, Stuart Andrie, showed us around the apartment accommodation which is for single women of all ages. He points out the various features of each apartment: walk-in storage closets, kitchens with full-size appliances, four piece bathrooms and easily maintained laminate flooring. Some of the apartments overlook the Pat Bay Highway but until you open the windows onto the balcony off the living room, you aren’t aware of traffic noises. Because there is no limit to how long tenants can reside in the apartments it is hoped this will be a community that grows together and maybe even stays together over the years, creating a sense of history for the Village. And if the apartment dwellers feel the urge to interact the greater community, they are as welcome in the communal spaces as the moms with children.

Later some of us commented on what we had observed during the tour.  Sister Dawn said she loved the idea of a day-care program where children could spend the whole day.  For Sister Margaret it was the practicality of the beautiful surroundings at Rosalie’s Village which, most importantly, “respect the dignity of the person”.  When asked, Sister Joyce replied “Bright, clean, new, homey.” And Sister Pat commented on the sound-proof windows again.  It was encouraging to learn that small pets are allowed too.   The real message we took away came from Angela, however:

‘Thank you Sisters of St. Ann for trusting in a vision.”