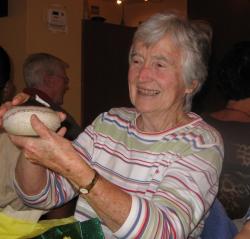 Sister Sheila Moss speaking on the occasion of the 150th Anniversary of the City of Victoria, August 2012

One of the most positive aspects of an anniversary is that it provides an opportunity to remember and celebrate those on whose shoulders we stand. As we have seen in these varied and creative celebrations of the 150 years since Victoria was officially declared a city, Victoria has no shortage of significant and colourful characters in its past and of heritage buildings and sites that maintain today something of our history. For many of you here, perhaps it is the impressive and unique St. Ann’s Academy on Humboldt Street, standing tall among other historic buildings such as the Legislature and the Empress, that you identify with the Sisters of St. Ann. I am happy to have this opportunity to represent, not the building, but the many flesh and bone women who, as Sisters of St. Ann, have played an important role in the history of Victoria and of BC.

Today it is not unusual for young people to travel to far off countries, either on tour or to serve in some helping capacity for a certain period of time. But before the 20th century, the earth seemed immense and generally unknown. Travel was difficult and unsafe. With the exception of the brave and often desperate immigrants from abroad, people stayed close to where they were born.There were other exceptions.

Let me tell you a bit about the early sisters who came from Quebec to BC in the mid 19th century.

In 1857, Bishop Modeste Demers left Vancouver Island for Quebec on a search among religious communities for teachers who would come west to teach the children of the French Canadian fur traders and their aboriginal partners or wives. He found a positive answer to his request in a small community only recently founded and serving in the rural villages of Quebec. All 44 of the Sisters in the congregation of the Sisters of St. Ann offered to leave their convents, their families and the familiar environment with no expectation of ever returning to come to a strange and foreign land on the other side of the world: Victoria. Four were chosen.

After an arduous journey of 2 months along the Atlantic coast, crossing the Isthmus of Panama and then up the Pacific coast, the four young women, accompanied by a loyal and devout Catholic laywoman and 4 clergymen arrived in Victoria on June 5, 1858 four years before Victoria was incorporated. Even Bishop Demers who had been away only a year was astounded by the changes he saw before him. From a rough Fort and a few cabins outside the Fort walls in which the fur traders and their families lived , Victoria had become an established town supporting businesses and hotels as well as numerous saloons and bars. The Fraser River gold rush had completely altered the young colony. Steamers landing at the wharf brought in hundreds of men from San Francisco and other cities seeking their fortune in the gold fields.

Bishop Demers, his companions, the four Sisters and their companion, were welcomed by Governor James Douglas, Dr. John Sebastian and Mrs Helmcken and other citizens of Victoria. After a refreshing meal at the Helmcken household the Sisters were led to a small, rundown shack with dirt flooring, no glass in the windows and no well or outhouse.

Immediately they set about cleaning the house, laying their mattresses on the floor in the loft and preparing the downstairs by placing boards on packing boxes to form the seats and tables for the classroom. 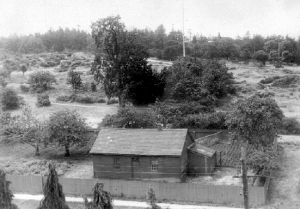 “The log cabin convent was a cedar structure thirty feet by eighteen feet. The back and front had doors with windows on each side of them and a window in each of the gable ends. A double chimney and a rough partition divided the house into two rooms. The flooring was good but there was no ceiling. The outside walls were clap-boarded but inside the squared timbers were bare…the Sisters spread their mattresses on the floor and piled them in a corner in the day-time. They taught on one side of the chimney while the cooking proceeded on the other side…the log cabin convent remains a monument to these early times.”

Sister Edith Down SSA, in A Century of Service

At first, the number of children to come to the school was small and consisted of First Nations and Métis children but it quickly grew and all children who wanted an education were welcomed including three of Governor Douglas’ daughters. The classroom was soon found to be inadequate and an extension was built. From the first months of their arrival, the Sisters were called not only to educate the children but to also visit homes to care for the sick and prepare the dying.

Thus was laid the foundation for the many schools and hospitals built and run by the Sisters of St. Ann throughout the province and in the north in the 154 years since they first made their home in western Canada. Mother Mary Providence, a daring and visionary superior in those first days stated,

“A woman’s influence is not limited, life will be mostly what women truly wish it to be.”

In a period when a woman’s role was identified with the home, these women were on the streets and in the businesses fundraising, hiring, directing and praying that God would provide for all that was needed. And God did!

Mind you, God had some help from a number of those significant early pioneers, who saw the value of the education and health care that the Sisters were providing. Even Emily Carr was a friend. At St. Joseph’s Hospital, the Sisters nursed her sister, Lizzie Carr, and in gratitude Emily gave the Sisters a painting which is now on display in the Art Gallery of Greater Victoria.

We continue to collaborate with the people and institutions of Victoria preserving valuable memories from the city’s founding years and supporting current projects that continue the legacy and values of the Sisters. The Archives containing historical documents, photographs, artifacts and other records which have been carefully maintained by the Sisters from the pioneer days to the present are in the process of being moved into the BC Archives so they will be preserved. In addition, the first log schoolhouse, now part of the Royal BC Museum, has been restored and new displays highlight the role of the Sisters through artifacts and photographs. The Interpretative Centre at St. Ann’s Academy National Historic Site, also restored, continues to welcome visitors and keep alive the legacy of the Sisters of St. Ann, thanks to the Provincial Capital Commission and the Society of Friends of St. Ann’s Academy.

The Sisters of St. Ann have seen and lived the many changes in the city over the years. On this special occasion we rejoice with the Mayor and Council and with all the people of this fair city as we celebrate and give thanks for the many blessings given us all in these 150 years. Congratulations, Victoria and God bless us all!